By manually changing the Linktype using a hex editor in the Interface Description Block (IDB) of the PCAPng file will convince the packet analysis software that only 1 type of interfaces were available at the time of capture.

tl;dr
By manually changing the Linktype using a hex editor in the Interface Description Block (IDB) of the PCAPng file will convince the packet analysis software that only 1 type of interfaces were available at the time of capture.

WARNING: Throughout this post I reference “PCAP” and “PCAPng” interchangeably. I also perform operations on files who have the extension *.pcap while their file structure is actually *.pcapng . Everything in this post whether *.pcap or *.pcapng should be *.pcapng. Thank you.

At the bottom of that post I left with an indication that this could be done manually but I wasn’t quite sure how. This unanswered question has bothered me. I needed to know “Why?” and “How?”. This led to a path I never thought I’d cross: Manually editing raw hex to manipulate files.

My idea at the time was if we split the packets from the PCAPng file into 2 separate files each containing traffic from only 1 interface type, the packet analysis tools should have no problem processing them individually.

Using tshark I split the protocols into 2 files:

The above tshark commands will create 2 PCAPng files each containing only like-traffic using the display filter. With wireshark you can verify all the packets are alike within each file. Each tool tested (Zeek, Suricata, Brim & tcpdump) still gives the same error processing these new PCAPs as they did when processing the single PCAP containing both Layer-2 protocols. (see this blog post)

I’m thinking there are still artifacts in the new PCAPng files referencing the additional interfaces from the original PCAPng file.

When you open the new PCAPng files (eth.pcapng & sll.pcapng), even though they each contain only 1 type of Layer-2 header, in the Capture File Properties you’ll see 2 types of interfaces listed under the “Link Type” column header.

Ah-ha! This data must still be contained in the file …but where?

To summarize our issue with this specific PCAPng file and condense the information I will NOT step through every header, block field and options, instead I’ll give a high level description. Everything you’ll need to know about the PCAPng file structure is in the documentation.

Below is an abstract image representing the compisition of our PCAPng file, reading from left–>right. The file is broken up into different sections called blocks. Below is a summary of the file blocks we’re interested in.

Our PCAPng file closely resembles the “complex example” figure 6 from the documentation.

Our PCAPng file has 2 IDB blocks and inside each IDB is a different Link Type.

This is the source of our problem. 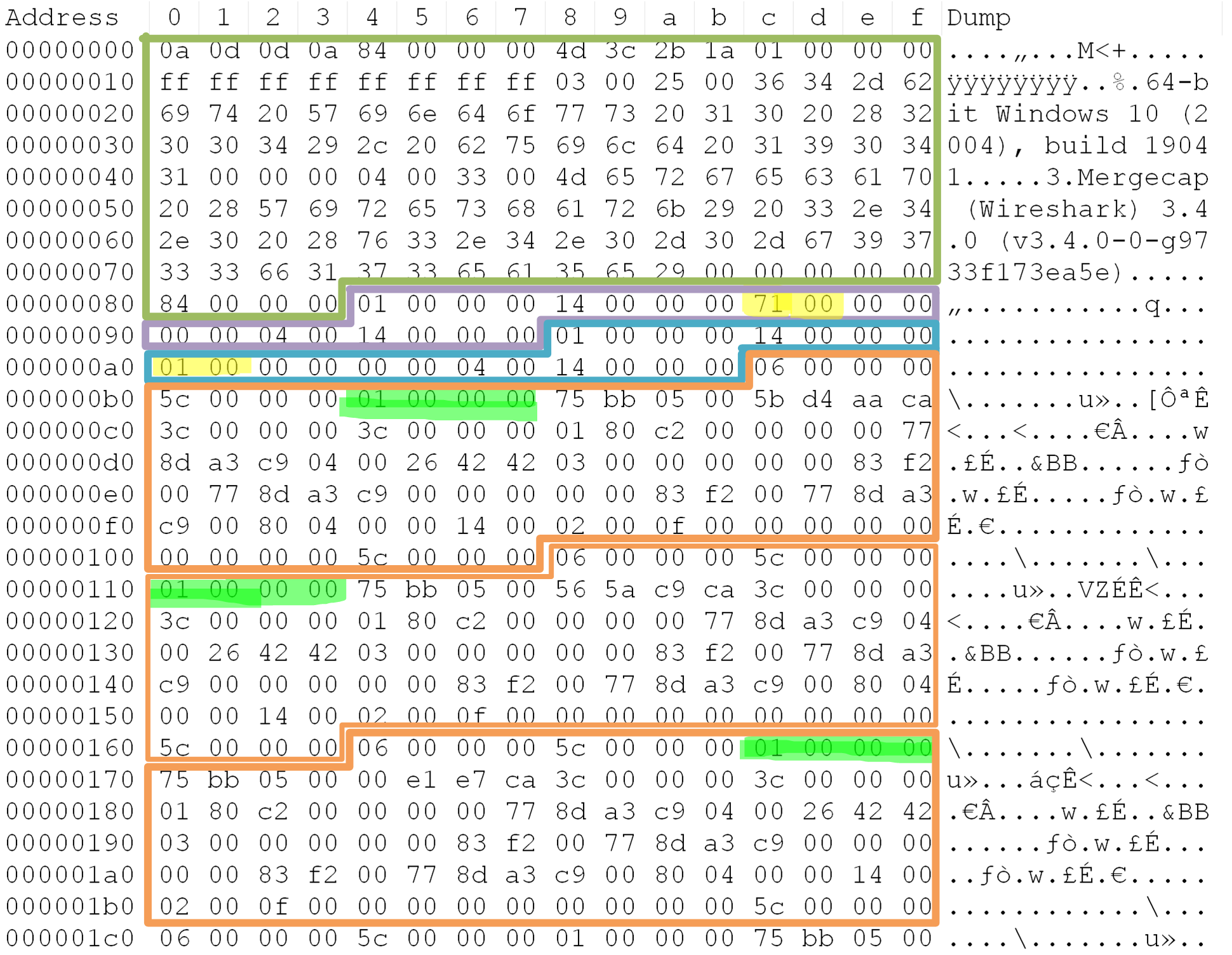 NOTE: The above hex dump should be read Little-Endian. Not all captures will be Little-Endian, that is left up to your local operating system.

In our case, using the example eth.pcapng file:

We should be able to change the Link type in the first listed IDB from 0x71 –> 0x01 without casing an issue.

This will indicate to applications reading the PCAPng file that ‘this file was produced on a system that was capturing on 2 interfaces and both were LINKTYPE_ETHERNET’.

After changing the values you can see from this screenshot, Wireshark now thinks both interfaces are the same.

Example Processing the Before & After PCAPs

This shows the meta-data around duration and file size the same, with the Hash values changing because of the 1 byte that was modified.

If you wanted to correlate the Hex dump image from earlier in this post against how it’s shown in Wireshark, you would be looking at these 3 packets: 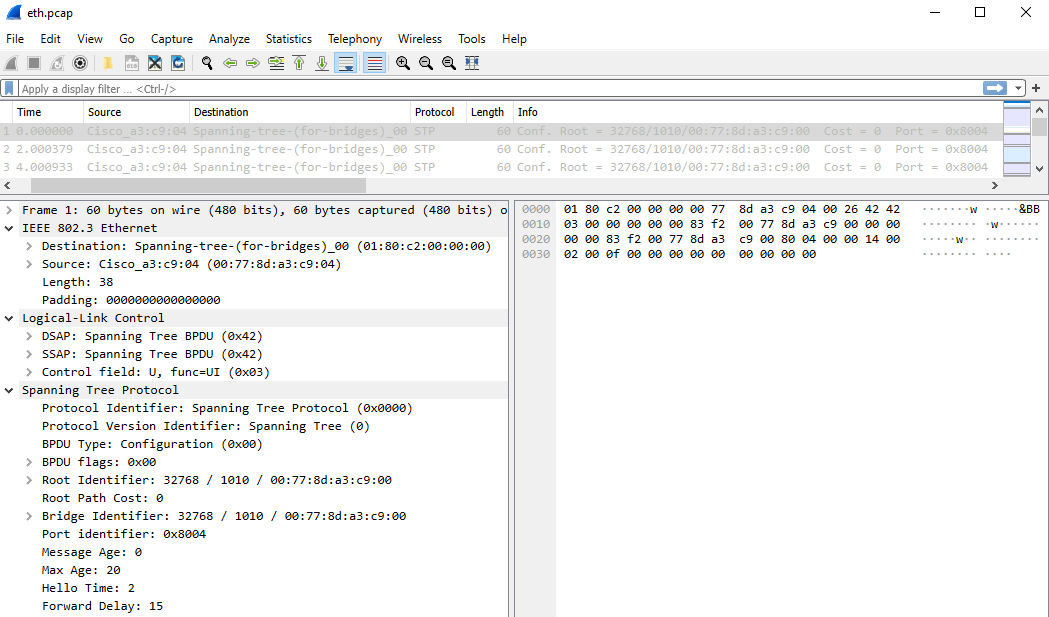